Have you noticed of late that Hollywood appears to be dishing out a substantial amount of film re-makes? I personally can’t recall have far back these go; The Italian Job – A good film, but could have donned another title and still have been good, Planet of the Apes, Spider-man, Hulk and Total Recall… Now I’m not by any means slating these re-makes, I thought Total Recall was excellent with Colin Farrell – though he was no ‘Arnie’ but the alterations in the story suited the 21st Century, making that much more believable. 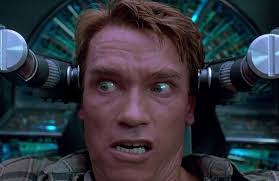 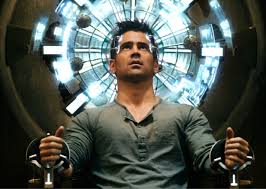 Now I can feel the heckles already rising on some of you who disagree with me, with thoughts that the original films were iconic and irreplaceable, so please calm down, there is no insult intended – Unless you’re referring to The Sweeney re-make, with Ray Winston – I mean WTF????? As you can see I digress…. Again……

I do want to review a film though, that in my personal opinion blows the original out of the water, shoots it down in flames, liquidizes the frog!!!! I’m talking about DREDD.

Now I was never able to afford more than one comic when I was a child, yep I know when everything was black and white in those days and all thirty of us lived in one room….. So my allegiance was towards Star Wars Comics, though a good friend of mine was into 2000AD, and it was there I learnt of Judge Dredd.

The original film was screened in 1995, whereby Sylvester Stallone kitted himself in lots of gold and red plastic and took on the role of Judge Joseph Dredd, granting the infinite words, ‘I am the Law’ out of a bent mouth! Now I haven’t carried out enough research into how true to the original comic character story the film is…. Bite me! And I welcome any responses to the review that can fill in the comic book gaps…. But it gives an account of Dredd’s history within it and his actions to prove his innocence. Now I don’t intend to go too in depth into reviewing this portrayal, I think seeing both films is believing and I want you to form your own opinions, (Maybe our illustrious leader could create a voting slip on films and remakes and we can vote for our favourites?) Anyway I found all in all the Stallone film really cheesy! It digresses from serious to humorous with a piss poor transition. 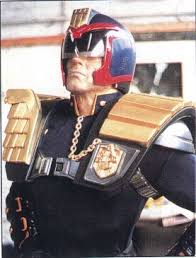 Residence of Peach Trees – I AM THE LAW!!! 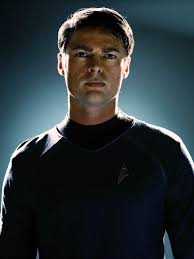 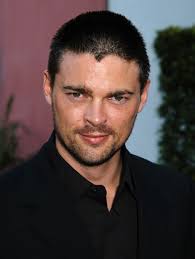 Set in a future Post-Apocalyptic Earth, the United States is a baron wasteland, bar Mega City One, an east coast people’s pen. 8,000,000,000 are crammed into the confined space with copious gigantic tower blocks housing the majority of residents. Crime is rife with over 17,000 reports of violence; theft and drug induce mayhem polluting the streets. ‘Slo-Mo’ that latest drug hitting the market is spreading its disease like a forest fire through Mega City One. Its production and distribution being controlled by ‘Ma-Ma’ a scarred prostitute turned gang leader, and ruler of MC1’s underworld.

The Police are a thing of the past, and the only thing preventing crime in this Hell Hole are the Men and Women of the ‘Halls of Justice.’ Urban Cops known as Judges, provide a degree of order, with the ability to deliver sentences for crimes out on the street, with the most common sentence being that of execution for the majority of felonies. One such Judge is Dredd. Astride his Lawmaster, a futuristic motorcycle and armed with his Lawgiver, a DNA Coded side arm with various degrees of ‘Kick-Ass’ he patrols the streets of MC1. The story is concentrated on failed recruit, named Anderson, a female psychic who could not make the grade as a judge. However, due to her extreme abilities the Halls of Justice Superiors want her further assessed by Dredd. This leads them to the notorious 200 story tower block, named Peach Trees, to investigate a triple murder/execution. It does not take long before they realise the block is the central headquarters for Ma-Ma’s Criminal enterprise. Without giving anything away, the story becomes an us and them battle between two Judges and the entire Peach Trees Criminal Fraternity, with residents being forced to take sides. 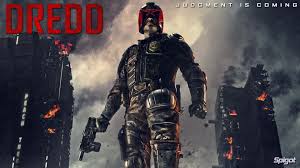 To me the film was awesome…. I mean Dredd…. Every Copper’s wannabe hero. I’m telling you now if I could deliver sentence on the street ¾’s of my paperwork would be binned!!! The story was dark, evil, violent but exciting all in one slice. But also, extremely simple. One location, a confined area and then war. Karl Urban portrays the character excellently, no emotion, one expression and completely ruthless. Now to me, having only read snippets of Judge Dredd in 2000AD, that is how Dredd should be, not some grunting clown who is totally invincible, a Superman in body armour, he is flesh and blood, with a degree of Hell I him.

Please see for yourself, come to your own conclusions and let me know your views in the comments box.

A London based copper & all round Sci-Fi geek with a particular passion for Doctor Who. I also love motorcycling & movies. Favourite tv shows include the late greats like Life on Mars & Ashes to Ashes, NCIS, Burn Notice & really anything fantasy/Sci-Fi based. Two favourite saying: 'Im definitely a madman with a box' & 'You don't need a degree in applied bollocks to work that out!' END_OF_DOCUMENT_TOKEN_TO_BE_REPLACED
This entry was posted on Monday, February 4th, 2013 at 2:21 PM and tagged with BadWolf187, Dredd, Film, Judge Dredd, Total Recall and posted in Comics, Films. You can follow any responses to this entry through the RSS 2.0 feed.
« WoW:TM is a Thing again.
A different take on the Star Wars prequels… »