This isn’t really a full update to my quest for garrison clearance, but from my point of view it’s quite a big change – I’ve upgraded the helmet padding!

See, when I bought the armour it had a hard-hat harness wedged into the dome of the sun bonnet. This seemed like a rather good idea at the time, as it was adjustable, sat comfortably, and allowed the circulation of air around my head. However, in practice (and after the initial excitement had worn off and allowed me to actualy look at what I’d bought) I realised that it didn’t work. It lifted the helmet too high, so that the chin of the helmet barely covered my chin, and the eye holes were half way up my forehead!

So, I removed it, and set about figuring out another way to stop the helmet spinning freely around my noggin’. As I was quite pressed for time (I decided to start making these changes less than two days before my first public appearance in the armour), I got creative – and in the cupboard we had sheets of fake snow bought buy Hibiscus for a christmas photo shoot. Once wadded and stuck in place with masking tape it made perfect padding.

However, it didn’t last long. First off it would never last longterm, and secondly I made the mistake of letting a friend of mine try on the lid, and despite my stern admonishment that he not adjust the padding in any way, he did just that. Which meant it no longer fit properly.

So fast-forward to today, one week away from my next appearance, and I’ve decided to finally fix the problem in a more permanent fashion. Today at work we received a delivery of new hard drives, all of which came in their own little boxes, padded with sheets of foam! So after squirreling them away in the boot of my car, and much chopping, fitting, re-chopping, taping, and more fitting, I now have a very snug helmet!

OK, so it won’t win any beauty contests, but it stops the lid from wobbling about on my head! At least, that’s the plan. I guess I’ll see on Monday, when I’ll be in Harlow town centre at HMV….

Now that the insanity of moving house is more or less done with, and we’re confortably settled into our new home (the wonderfully named “Castle GreySkull”), I’ve finally had a chance to start making the changes to my armour pointed out by a friend of mine who has already gotten his armour through the clearance process.

First up is the simplest change – swapping the black strapping on the thigh drop boxes for white. Stupidly easy to do, since this particular suit is strapped together with Velcro, making changes and adjustments (such as for expanding waistlines…) a doddle. Sourcing the Velcro was also easy (and cheap), as I got it from a certain well-known supermarket, where every little helps. And it only cost me a quid (that’s £1 for all you foreigners). Not much more to say about this change since it’s ridiculous in its simplicity, so here’s some pictures instead. 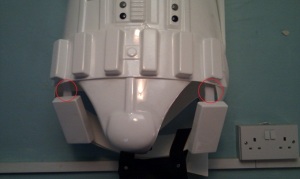 The new white ones

Next is the first of the changes to make me nervous. “Why would modifying a costume make you nervous Rooney?” I hear you all ask. Because I have to cut lumps off of the most expensive thing I own…

In fact I was so racked by nerves that I completely forgot to take any “before” shots, so you’ll just have to make do with the one I made in Paint! 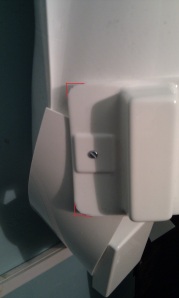 My MS Paint skills are unrivalled.

The belt came with squared-off corners, which aren’t screen accurate, so they had to be trimmed down…

I still need to smooth the edges of the cuts – I made the cuts with a pair of snips which leave less than smooth curves –  but since I’m out of sandpaper that’ll have to wait for now.

So, with those two jobs out of the way, I am now one step closer to trooping around a town near you proudly sporting that little logo on my left shoulder pad!